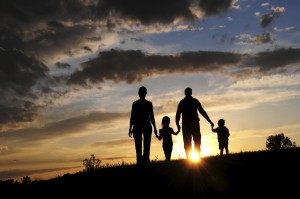 Which Divorce Would You Rather Have?

Isabelle is standing at the top of a sloping brick driveway. Her sister stands beside her. She is practicing in her mind the words she was trained to say. As her dad’s red SUV finally reaches the front door, Isabelle looks at her sister and then looks at her mom who has a smirk on her face. Mom’s eyes prod Isabelle. Isabelle fears not having the courage to say what she knows in her heart is wrong, because she feels hurt and fear.

Dad pulls his car to a stop and peers out the window at the children. Isabelle and her sister say simultaneously, “We don’t want to see you!” Dad glares at Mom. He speaks no words. He stares at the children. Isabelle wonders if he sees the fear in her eyes? Tears well up in Dad’s eyes. He backs down the driveway. Isabelle watches until his truck is gone and listens until she can’t hear his engine any more. She cries. Isabelle is seven-years-old.

During their marriage, Diana and Jeff, Isabelle’s parents, had many disagreements about their finances. Diana is angry that Jeff wants a divorce and is feeling rejected and abandoned by Jeff. Trying to either avoid or tolerate Diana’s criticisms at home, Jeff has become more distant and absent from the home.

Diana hires an aggressive litigation attorney to teach Jeff a lesson. Their financial disagreements are now fought with warriors inside and outside of the courtroom. One way to win the financial battle is to have more custody of the children. Less time with Jeff means more child support for Diana. Diana claims Jeff was absent from the home and hence did not care enough about the children.

Jeff, on the other hand, will not want to lose the financial battle. The war brings out the ego big time. Suddenly the family business is doing poorly. Jeff claims that the market is down for their business and the divorce has caused him depression and inability to perform. Jeff would rather lose money than lose the war with Diana.

It is far too common that in a litigated divorce, parents lose sight of what is most valuable and precious in their lives, their children, their peace of mind, their purpose in life.

The chaos, competition, and the process of litigation can be blinding, forcing you to be locked into the competition.

Jeff consults with a Collaborative Divorce attorney and learns about the how divorce proceeds in litigation, mediation, and the Collaborative process. Realizing the damage caused by litigated divorce, Jeff sets aside his ego, and appeals to Diana’s interest in saving money. He asks her to meet with his Collaborative attorney together to explore their divorce options.

Diana goes to the meeting with Jeff. She is skeptical and doesn’t trust Jeff’s motives. Diana is heard, respected, and listened to by Jeff’s Collaborative Divorce attorney. When asked what is most important to Diana, she says the children, financial stability, and Jeff listening to her.

During their consultation, Jeff and Diana walk through how children are handled in litigation, what typically happens with the finances and the parties’ communication. They would ultimately and predictably hire two litigation attorneys, two forensic accountants, one to three custody evaluators, or a minor’s counsel (depending on the judge), two business evaluation experts, two appraisers for the house, and so on.

Diana sees an opportunity for finally being able to get her complaints heard by Jeff through the communication coaches.

Diana and Jeff work with their communication coaches and learn how to listen and co-parent together.

Jeff and Diana were supported and guided by the team through their divorce; Isabelle and her sister experience their parents watching out for them, which eases the transition of the divorce.

Diana says: “Based on guidance provided by our communication coaches through the Collaborative Divorce process, we didn’t talk to the girls until the week before Jeff moved out, and I think that was the best choice. Since the girls only knew for a short time, they didn’t have to worry about it and mull it over.”

Jeff says: “Even though we disagreed about everything else, we tried to agree on what to tell the girls, it helped them have sense of trust in both of us.”

Jeff and Diana are now divorced. They reached a financial agreement without a lengthy fight in court, which can often save a couple money when compared to ongoing litigation. They share custody of their children and have a parenting plan in place thanks to guidance from their coaches. Isabelle and her sister are adjusting to their new family structure and have no doubt their parents love them just as much as before the divorce.