My married friends (as well as myself) complain about how they can’t get their spouses to change certain annoying and undesirable traits, whether it’s a spouse who has to control all the money, or a spouse not being emotionally available, or a spouse that doesn’t do a particularly good job watching the kids, or a spouse that’s angry all the time.  My clients, too, complain about their spouses during the divorce process – how they are controlling with the money, how they are emotionally unavailable when they try to talk to their spouse about why the marriage ended, how they are not focused on their kids during their custodial time, etc.  When I ask my clients what their spouses were like during the marriage, they describe exactly the same undesirable traits that are dealing with now.  Based on my very unscientific and anecdotal survey of clients, it turns out that getting a divorce does nothing to change a spouse’s annoying and undesirable traits.  Yet, inevitably, almost every one of my clients has this expectation that now that they are getting a divorce, their spouse should change.

First, my two cents on this matter.  If it were me, I’d be pretty pissed if after years and years of trying to get my spouse to change that all of the sudden we get a divorce and he sheds all of his bad behaviors and becomes this totally amazing person that he never was during our marriage.  If he could change after we separated, then he could have changed during the marriage but for some reason chose not to change.  Yes, I’d be pretty unhappy.

However, the reality is that people don’t change, or if they do it’s because there’s an attorney whispering (or yelling) in their ear that they need to become super dad or mom to secure as much custodial time as they can.  But apart from that, change just doesn’t seem to happen for most people, and because there is an expectation that a spouse should change, it often becomes a roadblock to settling issues in a divorce case even if the issue that needs to be settled (such as whether or not to sell the family residence) has nothing to do with the undesirable personality trait.

This is one example of why the collaborative process can be so beneficial for divorcing families. The collaborative process is specifically set up to deal with the emotional aspects of divorce that create roadblocks to settling issues and to help families move forward.  The adversarial process in a typical litigation practice has the opposite effect.  It pits the parties against one another and magnifies the other spouse’s negatives traits and animosity between them.  Even when cases settle in a typical litigation process, it is not because it is the right thing to do for the family, it is generally because most families don’t have enough money to go to trial.

I did not lose my sense of compassion when I became an attorney.  When I meet with a client, it is my hope that notwithstanding the reasons that she or he are getting a divorce, that she or he can come out of the process with maybe a little worse for wear, but not completely destroyed.

Collaborative / mediation is simply a better way to achieve that result than the typical adversarial litigation process. 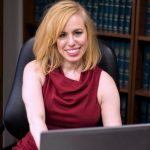